Skip to content
Published on April 28, 2017 in Texas Row Crops Newsletter by Muthu Bagavathiannan, Josh McGinty, Vijay Singh, Peter Dotray and Gaylon MorganPalmer amaranth and waterhemp are two pigweed species that have become problematic in row crop production fields in Texas. Palmer amaranth is widespread in the High Plains, Rio Grande Valley, Coastal Bend and Central Texas regions, whereas waterhemp is predominantly found in the Upper Gulf Coast as well as the Blacklands regions. Herbicide resistance in these two species is an emerging issue and extension specialists have emphasized the need for diversifying weed management tactics to prevent/delay resistance. Because pigweeds produce enormous amounts of seeds, preventing seed production from the escapes is a critical component of sustainable resistance management. Research has shown that a single Palmer pigweed plant can produce in excess of 1.5 million seeds under good growing conditions. Recent research conducted at College Station and Lubbock by Texas A&M scientists has shown that Palmer pigweed plants can emerge and produce seed as late as early October at these locations. This means that pigweeds can emerge even after the harvest of row crops in Aug/Sep in South Texas and manage to produce significant amounts of seeds in the fall. The issue is likely of even greater importance in the southern most regions of the state, where winter frosts may not always occur. In a previous row-crops newsletter, we have emphasized the importance of managing these late-season emerging pigweeds to minimize future weed issues.On April 6, 2017, we noticed flower heads in Palmer pigweed that emerged early spring in College Station. By April 17, mature seed could be found on the flower heads of the group of seedlings that emerged first. These plants were of considerable size and produced ample seeds (at least several thousand seeds per plant) (Figures 1 to 3). This is the first time we ever noticed mature seed production in Palmer pigweed prior to summer in College Station, especially within the planting window for grain sorghum, cotton and soybean. At Corpus Christi, Josh McGinty observed Palmer pigweed seed maturity by mid-March this year.

Figure 1. View of a field with flowering Palmer pigweed in College Station (mid-April 2017)

This observation highlights the likelihood that Palmer pigweed can add seed to the soil even prior to planting the summer crops in some areas of Texas, and these mature weeds have caused many challenges for obtaining adequate control with the preplant burndown herbicides. It is likely that pigweed seed production has occurred prior to row-crop planting in areas south of College Station in the Upper Gulf Coast, Coastal Bend and Rio Grande Valley regions due to much warmer temperatures. We could not rule out the possibility for pigweed seed production in areas north of College Station as crop planting is usually delayed by few weeks.

This observation points to the need for robust early-season weed management practices implemented prior to planting. Application of effective burn-down or pre-plant incorporated residual herbicides is critical even if plans are there to disk the field prior to crop planting. If herbicide resistance is suspected, the burndown herbicides must include herbicides for which the pigweeds are still susceptible and must be applied prior to pigweeds reaching the 4 to 6 inch growth stage. Continuous wet weather conditions can complicate herbicide application timings. Thus, applications must be made at the earliest possible window to achieve effective control of the pigweeds. If burndown applications did not provide sufficient pigweed control due to resistance, larger growth stages, or other reasons, consider disking the field prior to mature seed production if tillage is an option. Keep in mind that pigweeds only need about two weeks from flowering to mature seed production. Pigweed flowers mature from the bottom of the seedhead upward, so look for dark brown to black seeds at the base of the flower head (see Figure 3). It is imperative to be vigilant in preventing seed production in pigweeds, and the importance of monitoring and managing early-season pigweeds should not be overlooked.

It is unclear whether we are finding biotypes (or portion of a biotype) that have developed the ability to germinate and produce seed early in the season. Further, we are not sure what portion of these seeds can germinate immediately and produce seed again during late summer. Research will be conducted to answer these and other practically relevant questions. 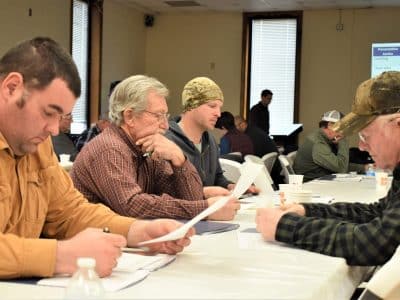 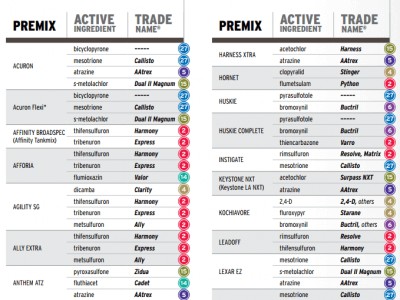 How to Interpret Herbicide Mode of Action? 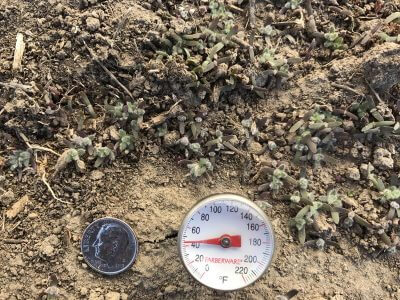