Weed biology often informs management decisions. Weed management practices that disrupt the weed life cycle by targeting weak points will result in better control. The biology of horseweed is particularly problematic because of the large number of seeds a single plant can produce, potential for long-distance dispersal of that seed, prolonged germination periods, and widespread herbicide resistance.

Where is horseweed a problem?

Horseweed is found throughout the US in roadsides, fallow areas, and agricultural fields. In agricultural settings, horseweed tends to be more prevalent in reduced or no-till systems where seeds remain at the soil surface because the small seed requires light for germination. The increased adoption of reduced tillage farming practices has increased the establishment of this weed species. Surveys of horseweed populations taken in Indiana showed that horseweed was present in 61% of no-till fields, 24% of reduced tillage fields, and 8% of conventionally tilled fields.

What is the emergence pattern of horseweed?

This weed can be classified as a winter or summer annual and has two germination windows: one in the fall (approximately August through December) and one in the spring (approximately March through May), depending on location and local conditions. Not only are there multiple germination windows, but these windows are prolonged compared to many other weed species and emergence is often variable from year-to-year within these windows. The multiple, long germination windows can make horseweed control much more difficult because repeated control tactics are needed as a single approach or single timing is unlikely to provide control over such a long period of time.

Since horseweed germinates in the fall and early spring, seedlings are often large and well established by the time summer crops are planted. If these individuals are not controlled prior to planting they can become very competitive with summer crops and cause significant yield loss.

What is the lifecycle of a horseweed plant?

As the season progresses, the plant will bolt and a central stem will grow out of the center of the rosette. At this point the plant is still growing vegetatively with the plant gaining size rapidly, making control much more difficult. In mid- to late-summer a cluster of branching flower stems form at the top of this bolted stem.

How does horseweed spread?

Horseweed only reproduces by seed. These seeds have a feather-like appendage (pappus) that aids in wind dispersal, much like dandelion seeds. There have been reports of horseweed seed spreading up to 300 miles by wind. With this ability to spread over long distances, fields can be infested even when good management practices are implemented, which is why repeated scouting is necessary. While most horseweed seeds are wind-dispersed, seeds can also be dispersed by water or with human assistance on vehicles or farm equipment.

How many seeds can a horseweed plant produce and how long can those seeds survive?

Horseweed plants flower in late summer and can produce up to 200,000 seeds per plant. These seeds are very likely to mature by late summer/early fall and are typically dispersed before cash crop harvest. Because this weed relies on the wind to disperse seeds, when seeds are mature they are easily dislodged from the plant and carried away with even a slight breeze. This biological trait makes this species unsuitable as a candidate for harvest weed seed control (HWSC) techniques that rely on seed retention on plants until harvest.

Horseweed seeds are relatively short-lived in the soil with most seeds not surviving more than three years. Seeds have very little dormancy and most will easily germinate when conditions are favorable, which is typically within the two germination windows mentioned above. Horseweed seeds will not germinate if buried deeper than 0.2 inches in the soil profile.

The combination of short seed longevity and inability to germinate from below the soil surface make this species susceptible to tillage as a control tactic.

What other biological weaknesses does horseweed have that can be targeted with management techniques?

The weakest point in a horseweed plant’s life cycle is the seed. Horseweed is an annual which has to reproduce by seed. These seeds are small, short-lived, and can not germinate from deep in the soil. The seeds also need light to trigger germination so practices like cover cropping or a dense crop canopy can limit germination. Management efforts should focus on suppressing weed seed germination through practices such as tillage and cover cropping, and preventing plants from producing viable seed.

*Herbicide names listed are not the only products that contain these specific active ingredients. Please check herbicide labels for more information.

Cultural Tactics: Competitive cash crops will delay or reduce germination, growth, and seed set of many weed species. For horseweed, the spring emergence window is ending or has already ended at the time of cash crop planting so efforts for control are better focused prior to planting. In some areas, where the horseweed germination window extends into the growing season, narrow row spacing can help the cash crop reach canopy more quickly and compete with young horseweed plants.

Crop rotation: is one cultural tactic that can impact horseweed density. Crop rotation provides the opportunity to diversify weed management tactics, preventing and combating herbicide resistance. Studies have shown that a soybean-corn crop rotation can reduce horseweed density compared to planting continuous soybean.  Corn is typically planted earlier than soybeans so this rotation allows for herbicide application earlier in the spring while the horseweed plants are smaller; residual herbicides applied to corn also prevent much of the spring emergence flush. There are also different herbicide options available for these crops.

Crop residues can play a role in suppressing fall-germinating horseweed. Studies in Tennessee have found that corn residue providing 75% ground cover reduced horseweed density the following May by 79 to 81% compared to where there was no crop residue and 49 to 75% compared to fields with soybean residue. Any tactic that will increase the amount of ground cover such as not removing crop stover or planting a cover crop, will help suppress horseweed. However, relying on these tactics alone will not keep horseweed at bay for a full cropping season.

In this study conducted in Pennsylvania, cover crops were seeded in the fall, and soybeans were planted the following spring. Horseweed seedling density was collected just prior to killing the cover crop with a burndown herbicide application.

All cover crops reduced horseweed density by 55 to 80% compared to no cover crop. While cereal rye offered the greatest suppression, all cover crop treatments reduced the number of horseweed plants, including forage radish. Forage radish winterkilled in this study but it has the potential to contribute to horseweed suppression during the fall emergence window.

Not only did cover crops reduce the number of horseweed rosettes, the size of the rosettes was reduced in the presence of cover crops compared to the no cover control. Where cereal rye was grown, most of the horseweed rosettes were less than 1.5” in diameter; in the no-cover check most of the weeds were 1.5 – 2.5” in diameter. The smaller size makes the rosettes more susceptible to a herbicide application.

In this video with Dr. John Wallace (Penn State), you will learn about horseweed biology, why horseweed is difficult to manage, and how to use a high biomass cover crop to decrease horseweed stand and seed production.

Weed management in cotton has been challenging in past years, particularly given the spread of herbicide-resistant species such as horseweed and Palmer amaranth. In this video, Dr. Charlie Cahoon, weed specialist at North Carolina State University, shows what integrated weed management can achieve when cover crops are included in a weed management program.

Mechanical: Tillage can be used as a control tactic to manage horseweed since seeds are small and require light for germination, so germination is greatly reduced once the seeds are buried by even a little bit of soil. The increase in reduced tillage acreage has favored horseweed spread and establishment.

Aggressive tillage practices will have the greatest effect on horseweed by burying weed seeds or uprooting plants. Reduced tillage practices, such as vertical tillage, are not as effective plowing or aggressive disking for seedlings and often will not have much of an effect on larger horseweed or bury seed enough to keep them from germinating.

Studies have shown that no seedlings will germinate when buried more than 0.2 inches.

Studies from Nebraska demonstrated tillage alone was very effective in controlling horseweed, with fall tillage reducing densities by 88% and spring tillage reducing densities by 94%. Tillage was more effective than any single herbicide application in the fall or spring. Herbicide use in combination with tillage or sequential herbicide applications provided up to 99% reduction in horseweed plants. Mechanical weed control was effective in this study, but an integrated weed management strategy is critical for managing herbicide resistance.

While tillage can contribute heavily to horseweed management, in some instances tillage for weed management is not desirable because of potential trade-offs, such as cost or the reduction in erosion control. In those instances, there are alternative tactics that are effective for controlling horseweed.

Chemical: Horseweed should be controlled when small, preferably in the rosette stage. Once the plants begin to bolt, control becomes more difficult. Control timing can be problematic because of the multiple and prolonged germination windows.

Control is very important prior to planting crops as there aren’t always options for adequate control in-crop, especially with soybeans and cotton. Burndown herbicides, such as 2,4-D, dicamba, glufosinate (Liberty), saflufenacil (Sharpen), paraquat (Gramoxone), or tank mixes of these herbicides, can be applied in the fall or spring to control horseweed. Additionally, waiting until after planting to manage horseweed typically means the plants are too large for adequate chemical control.

Glyphosate will control susceptible horseweed but resistance to glyphosate is widespread across the United States. Including residual herbicides in a preplant application can extend weed control until crop canopy closure. Examples of soybean herbicides include flumioxazin (Valor), sulfentrazone (Authority products), or metribuzin; corn herbicides include atrazine and mesotrione (Callisto); and cotton herbicides include flumioxazin (Valor) and fluometuron (Cotoran). Refer to herbicide labels for appropriate uses and rates in your area. Due to herbicide resistance, there may be fewer options to control horseweed postemergence in many crops. Refer to your local extension’s weed management guide for effective postemergence options.

Biological: Currently, there are no commercially available biological control agents for horseweed. However, research has identified bacteria that can control horseweed; a commercial product has yet to be formulated.

Conyza bonariensis, or hairy fleabane, is a species similar to horseweed. The distribution of hairy fleabane in the US is found in the southern and western states whereas horseweed has been reported in all fifty states.

Worldwide, there have been reported cases of herbicide resistance in hairy fleabane similar to what has been reported in the United States. While there are some biological differences between the two species, management strategies are very similar. 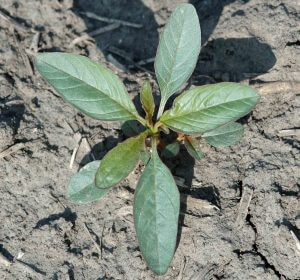 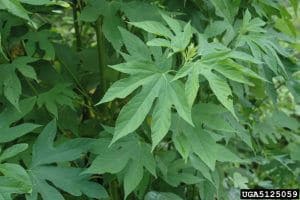 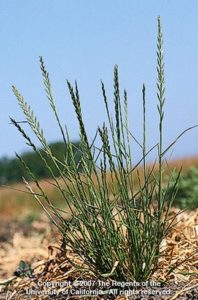 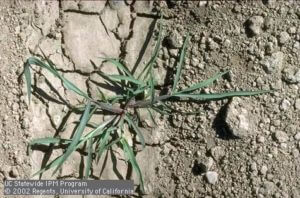 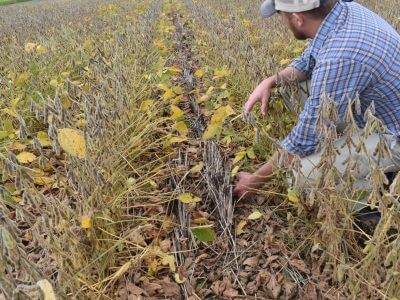 October 8, 2019   Grow IWM
How much biomass do you need for weed suppression? The more you let a cover crop grow, the greater effect that biomass will have...
Read More 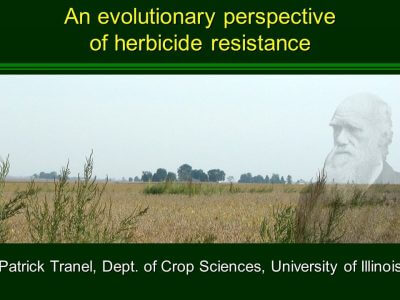 April 19, 2019   Grow IWM
Research from the past few years has shed light on how important it is to mix herbicides rather than rotate herbicides. Herbicide...
Read More

Common ragweed is just saying "Hi, here I am again". See how to Get Rid of This Weed in GROW's website: https://growiwm.org/weed/common-ragweed/...

RT @TakeActionWeeds: The 2021 Herbicide Classification Chart is now available! We'd like to give a special shoutout to the farmers, researc…